Nasser Makhoul At the Rhythm of His Wooden Music Instruments 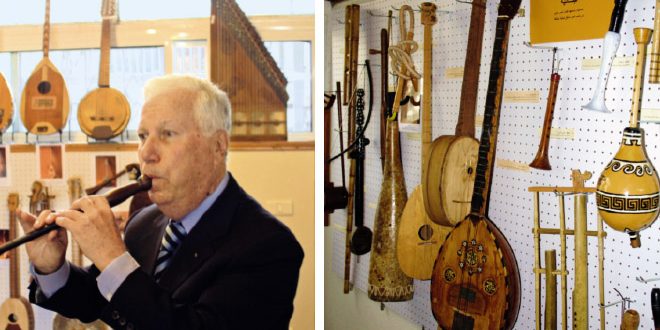 His rich life experience led him to become an expert and researcher in chordophone and aero phone music instruments. His early beginnings are as fascinating.

When the 13-year-old boy was following every morning a shortcut through the woods, an encounter with a local shepherd changed his life. He didn’t want to go with the kids to school. The shortcut was a roman road built in a wonderful natural setting between his hometown Joun and Deir el Moukhalles or the Holy Savior Monastery. Nasser Makhoul was then enchanted by the sound of the Nay or flute that the almost solitary shepherd was playing on a hill. His seat was on a rock beside that shepherd amidst oak, pine and olive trees.

While the goats were grazing, Nasser Makhoul was learning to make his first Nay. It’s still affectionately present after half a century at Diwania; the exhibition of creativity where he displays a collection of his own created instruments as well as historical ones of the Middle East. He’s been the only person to make such a collection and show it in Lebanon and around the world.

He recalls those days with enthusiasm in every detail. Every experience was then shaping his future career in the world of wooden music instruments. It’s with nostalgia that he also speaks of those agreeable nights spent on the terrace of his home at his beautiful Joun. His father and few artist friends would gather to sing and dance the night away.

Among them was the popular Nasri Shamsseddine. They were the 1950’s and Nasser Makhoul was growing on the music of iconic Lebanese composers, singers and the Brigitte Bardot movie “And God created woman”. When he couldn’t fulfill his father’s wish to play the Nasri Shamsseddine song Saadiyeh, he went to the Conservatory in Beirut to study music. But the serenading gypsy across Joun on the tambura was more inspiring. A wooden sweet box bought from a sweet shop in Saida and thin wires he extracted by burning a truck wheel were the material he used to make his first tambura. Nasser Makhoul knew then at the age of 15 that he will become an expert in chordophone and aero phone music instruments.
After almost 50 years Nasser Makhoul had made with his own folkloric touristic group 181 trips across the world (1968-2010) representing Lebanon in different cultural and touristic events. Because folkloric traditions carry the memory of people’s past and are part of his identity and future, Nasser Makhoul explored Lebanon’s villages. He interviewed elderly people compiling every detail on Lebanon’s folkloric music instruments, costumes and dabkeh, the group dance. He knows every region’s music instrument story. The Shabbaba that princess Elissa played when she left Tyre on her ship to Carthage sounded sad.

Mizmar Baalbek is made of peach tree wood, and its strong sound fills the plain’s space with music and dancing. Abou Hatab was from Basta Beirut. Nasser Makhoul tells that he used to hide the tambura in his clothes, go to Ain el Mraysseh at café El Hajj Daoud where men smoked the narguileh while waiting the return of the seamen. They hold their breath when Abou Hatab plays “sea music” whose notes break on his instrument’s cords like waves on the beach. When he stops they inhale a narguileh puff swarming the water in the vase in accord with Abou Hatab’s rhythm.

At his atelier in Ajaltoun, Nasser Makhoul still works today on developing and inventing chordophone and aero phone music instruments and even combining them, distinguishing himself with his creations. A squash from Joub Jannin was transformed into an instrument. He’s also been participating in conferences such as World Wood Day in Nepal and Turkey performing and lecturing on wooden instruments. An ever-inspired poet and musician Nasser Makhoul carries his inventions, expertise and Lebanon’s music heritage to the world.